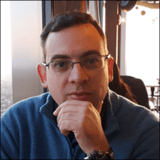 Show Academic Trajectory
Ego Network
D-Core
Research Interests
Author Statistics
Experience
Sign in to view more
Education
Sign in to view more
Bio
Giorgos Flouris is a Principal Researcher (Grade B') at FORTH-ICS. His research interests lie mainly in the areas of Knowledge Representation and Reasoning, Artificial Intelligence (with emphasis on Belief Revision, Computational Argumentation and Argumentative Persuasion), and Semantic Web (with emphasis on Ontology Dynamics, including Evolution, Repair and Change Detection). He owns a bachelor in Mathematics from the University of Athens and an MSc and PhD in Computer Science from the University of Crete. Giorgos has published several papers in peer-reviewed journals and conferences, has co-supervised more than 20 students of various levels and has received a number of fellowships and awards for his work. Giorgos has been involved in around 10 projects (mostly funded by the EC), and has reviewed various European and national projects and proposals.