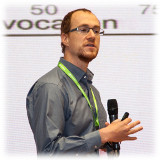 He has published more than 200 papers in peer-reviewed international conferences and journals and co-authored the latest versions of the MPI specification. He has received best paper awards at the ACM/IEEE Supercomputing Conference in 2010, 2013, and 2014 (SC10, SC13, SC14), EuroMPI 2013, IPDPS'15, ACM HPDC'15 and HPDC'16, ACM OOPSLA'16, and other conferences. Torsten received ETH Zurich's Latsis Prize in 2015, the SIAM SIAG/Supercomputing Junior Scientist Prize in 2012, the IEEE TCSC Young Achievers in Scalable Computing Award in 2013, the Young Alumni Award 2014 from Indiana University, and the best student award 2005 of the Chemnitz University of Technology. Torsten was elected into the first steering committee of ACM's SIGHPC in 2013 and he was re-elected in 2016. His Erdős number is two (via Amnon Barak) and he is an academic descendant of Hermann von Helmholtz.