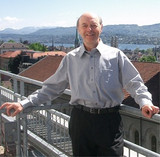 Show Academic Trajectory
Ego Network
D-Core
Research Interests
Author Statistics
ACM_Citations
Experience
Sign in to view more
Education
Sign in to view more
Bio
Yuri Gurevich is an American computer scientist and mathematician and the inventor of abstract state machines. He is Principal Researcher at Microsoft Research, where he founded the Foundations of Software Engineering group, and he is professor emeritus at the University of Michigan. Gurevich was educated in the Soviet Union, and taught in Israel before coming to the United States. The best known work of his Soviet period is on the classical decision problem. In Israel, Gurevich worked with Saharon Shelah on monadic second-order theories. The Forgetful Determinacy Theorem of Gurevich-Harrington is of that period as well. As far as his American period is concerned, Gurevich is best known for his work on finite model theory and the theory of abstract state machines. He has also contributed to average-case complexity theory. Gurevich is an ACM Fellow, a Guggenheim Fellow, a member of Academia Europaea, and Dr. Honoris Causa of Hasselt University in Belgium and of Ural State University in Russia. In 2014 he became one of ten inaugural fellows of the European Association for Theoretical Computer Science.