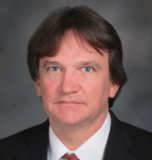 Show Academic Trajectory
Ego Network
D-Core
Research Interests
Author Statistics
Experience
Sign in to view more
Education
Sign in to view more
Bio
Dr. Stephen Swisher is head of the Division of Surgery and a professor of the Department of Thoracic and Cardiovascular Surgery at the University of Texas MD Anderson Cancer Center. He is also co-leader of the lung cancer initiative in its recently announced Moon Shots Program - the boldest-ever effort to dramatically reduce deaths to cancer.

Dr. Swisher earned his medical degree from the University of California at San Diego School of Medicine and his first academic appointment at UCLA Medical Center as a clinical instructor in the Division of Surgery. He came to Houston in 1994 for a residency in cardiothoracic surgery at MD Anderson and St. Luke's Episcopal Hospital/Texas Heart Institute, focusing on thoracic surgical oncology. In 1996 he joined the MD Anderson faculty as assistant professor in the Department of Thoracic and Cardiovascular Surgery. He has continually risen through the faculty ranks, achieving associate professor in 2001 and early promotion to professor in 2005. He was named chair of his department in 2007 and was awarded the Robert F. Fly Professorship of Surgical Oncology. In 2014 he was named head of the Division of Surgery and awarded the Charles A. LeMaistre Distinguished Chair in Thoracic Oncology.