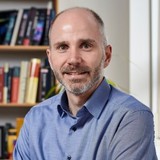 Show Academic Trajectory
Ego Network
D-Core
Research Interests
Author Statistics
Experience
Sign in to view more
Education
Sign in to view more
Bio
His research interests include probabilistic and statistical approaches to image modeling, motion estimation and tracking, as well as object recognition and scene understanding. He received several awards, including honorable mentions for the Marr Prize at ICCV 2005 (with M. Black) and ICCV 2013 (with C. Vogel and K. Schindler), the Olympus-Prize 2010 of the German Association for Pattern Recognition (DAGM), and the Heinz Maier-Leibnitz Prize 2012 of the German Research Foundation (DFG). In 2013, he was awarded a starting grant of the European Research Council (ERC). He served as an area chair for ICCV 2011, ECCV 2012 & 2014, and CVPR 2013, and is member of the editorial board of the International Journal of Computer Vision (IJCV), the IEEE Transactions on Pattern Analysis and Machine Intelligence (TPAMI), and PeerJ Computer Science.