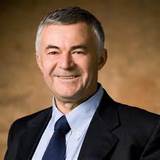 He is elected member of the US National Academy of Sciences and the European Molecular Biology Organization. Awards include: Paul Ehrlich and Ludwig Darmstaedter Prize (1991), Italian President Gold Medal (2005), Albert Sabin Gold Medal (2009). In 2013 he was nominated third most influential person worldwide in the field of vaccines (Terrapin). In 2015 he was awarded Fellowship of Imperial College Faculty of Medicine London and the Maurice Hilleman Award.
Canada Gairdner International Award 2017