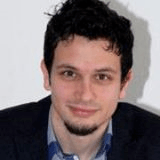 Show Academic Trajectory
Ego Network
D-Core
Research Interests
Author Statistics
Experience
Sign in to view more
Education
Sign in to view more
Bio
I have obtained my engineering diploma from the Electrical and Computer Engineering (ECE) department of the Aristotle University of Thessaloniki (AUTH), Greece in 2013. During my diploma thesis I worked, under the supervision of professor P. Mitkas, on the Development of an Autonomous Software Agent for Texas Hold'em using Neural Networks.
Since then I have worked as a research associate at CERTH, where I developed Traffic Prediction and Incident Detection Algorithms for the ECOMPASS project. Occasionally I have also worked as a web-developer and a network assistant.
I started my PhD in 2014 on “Mining data from text-steams”, under the supervision of professor M. Vazirgiannis. During the academic year 2014-2015 I also worked as the main developer for the University's Web Archive project.
My interests include the areas of machine learning, data mining, neural networks, Web Developing as well as telecommunication systems and Computer Networks.
Research Interests
Machine Learning
Data Science
Social Networks
Search and Information Retrieval