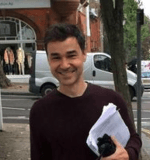 Show Academic Trajectory
Ego Network
D-Core
Research Interests
Author Statistics
Experience
Sign in to view more
Education
Sign in to view more
Bio
I am a machine learning professor at Oxford University, a lead research scientist at Google DeepMind, a Fellow of the Canadian Institute For Advanced Research (CIFAR) in the successful Neural Computation and Adaptive Perception program, and a Faculty Fellow of the Alan Turing Institute. I received my PhD from Trinity College, Cambridge University in 2000 on Bayesian methods for neural networks. From 1999 to 2001, I was a postdoctoral fellow at UC Berkeley in the artificial intelligence group of Stuart Russell. I was a professor at the University of British Columbia from 2001 to 2014. I have spun off a few companies, most recently Dark Blue Labs acquired by Google. Among my recent awards are a Google Faculty Research Award, a Distinguished Paper Award at the 2013 International Joint Conference on Artificial intelligence, the 2012 Charles A. McDowell Award for Excellence in Research, and the 2010 Mathematics of Information Technology and Complex Systems (MITACS) Young Researcher Award.