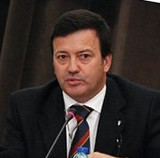 Show Academic Trajectory
Ego Network
D-Core
Research Interests
Author Statistics
Experience
Sign in to view more
Education
Sign in to view more
Bio
José Santos‐Victor received the PhD degree in Electrical and Computer Engineering in 1995 from Instituto Superior Técnico (IST ‐ Lisbon, Portugal), in the area of Computer Vision and Robotics. He did the Habilitation in 2005 and became a Full Professor in Electrical and Computer Engineering of IST in 2010. He is a researcher of the Institute of Systems and Robotics (ISR) and he founded and heads the Computer and Robot Vision Lab ‐  VisLab.   He is the scientific responsible for the participation of IST/ISR in various European and National research projects in the areas of Computer Vision and Robotics. His research interests are in the areas of Computer and Robot Vision, particularly in the relationship between visual perception and the control of action, biologically inspired vision and robotics, cognitive vision and visual controlled (land, air and underwater) mobile robots. Prof. Santos‐Victor was an Associated Editor of the IEEE Transactions on Robotics and the Journal of Robotics and Autonomous Systems. He was the Portuguese Delegate to Planetary Exploration Progamme of the European Space Agency. He is the Vice‐President of IST for International Affairs since 2006. He has been developing collaboration activities in different areas of the globe, namely with Brazil, Africa and China, besides Europe. He has been the Secretary General of the CLUSTER network from July 2010 to June 2012 and has recently been elected (on behalf of IST) to join the Board of Directors of the CESAER Network. He was responsible for the participation of IST in the KIC Innoenergy, where he is currently a member of the Supervisory Board. My research interests are in the areas of computer and robot vision, to address two questions: (i) how to develop artificial (robotic) systems that use vision and other sensing modalities to make sense of the world around them and (ii) to investigate, model and understand how vision is used in biological systems like insects or humans. One example is vision based-navigation, motion perception and control, including how to use video imagery in closed loop for mapping and control of land, air and underwater vehicles. It often requires the design of task-specific camera geometries, like omnidirectional and space variant cameras. This research draws inspiration from biology where evolution has lead to specialized and sophisticated solutions (both eye design and processing) adapted to the behaviour of the various species (e.g. compound eyes, foveal cameras). Another main area of research is cognitive humanoid systems. Together with neuroscientists and developmental psychologists, we aim to understand human cognition, sensorimotor coordination and learning, as well as to design robotic systems with learning and adaptation capabilities. Flagship projects have addressed the models of mirror neurons to enhance the ability of human action recognition, imitation and programming by demonstration. We have proposed a model of object affordances that improves a robot’s ability to manipulate objects, ground language and choose tools that are adequate to a given function.