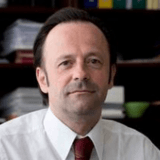 Show Academic Trajectory
Ego Network
D-Core
Research Interests
Author Statistics
Experience
Sign in to view more
Education
Sign in to view more
Bio
Professor Joachim K. Krauss is an expert both in general and in functional neurosurgery. Major clinical interests are complex spinal neurosurgery, functional neurosurgery and skull base surgery. Professor Krauss pioneered several new therapeutic concepts. He is also certified for sports medicine, pain medicine, rehabilitation and intensive care medicine. Over the past years, he received several awards and serves as a reviewer for numerous journals and academic institutions. His academic achievements include board positions in various professional societies. He serves as the Head of the Commission for Technical Standards of the German Society of Neurosurgery, as Secretary of the European Society of Functional and Stereotactic Neurosurgery, as Vice-President of the World Society of Functional and Stereotactic Neurosurgery, and as Head of the Task Force Neurosurgery of the Movement Disorder Society.