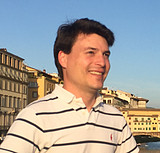 Show Academic Trajectory
Ego Network
D-Core
Research Interests
Author Statistics
Experience
Sign in to view more
Education
Sign in to view more
Bio
Fabian M. Suchanek obtained his Bachelor of Science degree in 2003 at the University of Osnabrück/Germany in Cognitive Science, studying Artificial Intelligence, Natural Language Processing, Neuro-Physiology, Maths, and Philosophy of Mind. He obtained his Master of Science degree in 2005 at Saarland University/Germany in Computer Science. Both degrees are graded excellent with distinction.
He obtained his PhD (Dr.-Ing.) in 2008 at the Max-Planck Institute for Informatics under the supervision of Gerhard Weikum. In his thesis, Fabian developed inter alia the knowledge base YAGO, one of the largest public general-purpose knowledge bases. For his thesis, he was awarded the degree “summa cum laude”, the Otto Hahn Medal of the Max-Planck Society, and a honorable mention of the SIGMOD dissertation award. YAGO gave rise to the YAGO-NAGA project, on which more than a dozen researchers work on key questions of semantics.

As a postdoc, Fabian spent one year at Microsoft Research Search Labs in Silicon Valley, reporting to Rakesh Agrawal. He worked on the Bing search engine and on product extraction from the Web. He went on to work with the WebDam team at INRIA Saclay/France, reporting to Serge Abiteboul. At INRIA, he worked on Ontology Matching and Ontology Watermarking.

From 2012 to 2013, he was heading the Otto Hahn Research Group “Ontologies” at the Max-Planck Institute for Informatics/Germany. This group was financed through the Otto Hahn Group Award, a special distinction by the Max-Planck Society that Fabian was awarded in addition to the Otto Hahn Medal. Together with his students, he worked on rule mining and information extraction.

In 2013, he became a Maître de Conférences (comparable to an associate professor) at the Telecom Paris University in Paris. In 2014, Fabian completed his French Habilitation (HDR) and German Habilitation (Privatdozent). In 2016, Fabian became a full professor at Télécom Paris. Fabian teaches classes on the Semantic Web, Information Extraction and Knowledge Representation. He has published around 80 scientific articles, among others at ISWC, VLDB, SIGMOD, WWW, CIKM, ICDE, and SIGIR. His paper on YAGO has more than 2000 citations, and all in all his work has been cited more than 9000 times. 4 of his works have received best paper awards or runners-up. In particular, his 2007 paper on YAGO won the Seoul Test of Time Award of the WWW 2018 conference. He reviews for several conferences and journals, including ACL, EDBT, WSDM, WWW, TKDE, TODS, AIJ, JWS, and AAAI. In November 2011, Fabian spent 3 weeks in Senegal to teach pro bono at three universities.