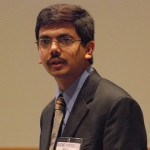 Show Academic Trajectory
Ego Network
D-Core
Research Interests
Author Statistics
Experience
Sign in to view more
Education
Sign in to view more
Bio
Balachander Krishnamurthy has been with AT&T Labs--Research since his PhD. His main focus of research of late is in the areas of Internet privacy, Online Social Networks, and Internet measurements. He has authored and edited ten books, published over 80 technical papers, holds twenty patents, and has given invited talks in over thirty countries. He co-founded the successful Internet Measurement Conference and Steps to Reducing Unwanted Traffic on the Internet workshop. In 2008 he co-founded the ACM SIGCOMM Workshop on Online Social Networks. He has been on the thesis committee of several PhD students, collaborated with over seventy researchers worldwide, and given tutorials at several industrial sites and conferences. His most recent book "Internet Measurements: Infrastructure, Traffic and Applications" (525pp, John Wiley & Sons, with Mark Crovella), was published in July 2006 and is the first book focusing on Internet Measurement. His previous book 'Web Protocols and Practice: HTTP/1.1, Networking Protocols, Caching, and Traffic Measurement' (672 pp, Addison-Wesley, with Jennifer Rexford) is the first in-depth book on the technology underlying the World Wide Web, and has been translated into Portuguese, Japanese, Russian, and Chinese.