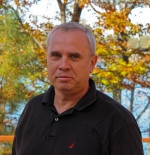 Department of Chemistry and Biochemistry College of Sciences, Georgia Institute of Technology
关注
立即认领
分享
关注
立即认领
分享
基本信息
浏览量：161
个人简介
His research interests revolve around theoretical studies of the electronic and optical properties of organic and inorganic systems, including energy- and electron-transfer phenomena, with an emphasis on polaronic effects.

Research project - Organic solar cells are attracting significant interest due to a number of valuable features such as low cost, low-environmental impact, ﬂexibility and large-area manufacturing capability. Although, organic solar cells currently reached power conversion efficiencies up to 13%, these values remain substantially lower than those in silicon or perovskite solar cells. In order to develop new organic photovoltaic materials with improved efficiency, an in-depth understanding of the fundamental mechanisms that define device performance must be reached. A fundamental issue under much debate in the organic photovoltaic literature relates to the role of excitonic and charge-transfer triplet states. In this project we aim to develop a computational approach capable of providing reliable splitting energies and intrinsic lifetimes of the singlet and triplet charge-transfer states in organic photovoltaic materials. We will also investigate the impact of excitonic and charge-transfer triplet states on the geminate and non-geminate recombination processes.
研究兴趣