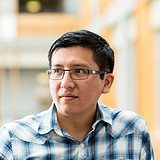 Show Academic Trajectory
Ego Network
D-Core
Research Interests
Author Statistics
Experience
Sign in to view more
Education
Sign in to view more
Bio
I am an associate professor in the School of Applied Mathematics (EMAp) of Getulio Vargas Foundation (FGV). Previously he was an assistant professor in the Research and Innovation Center in Computer Science (RICS) at the San Pablo Catholic University (UCSP) and a research associate in the UW Interactive Data Lab (IDL) at the University of Washington working with Jeffrey Heer. I obtained my PhD from the NYU Tandon School of Engineering in 2015 under the supervision of Claudio Silva. Before going to NYU I spent a year in the Scientific Computing and Imaging Institute (SCI) at the University of Utah (UoU). I have a M.S. in Computer Science from the Instituto de Ciências Matemáticas e de Computação (ICMC) at the University of São Paulo (USP), Brazil-2010, and a B.E. in System Engineering from the National University of San Agustin (UNSA), Peru-2008.
As part of my professional life I worked in zAgile Inc as a software engineer on 2008. I've done internships at Google Inc. (2008 and 2010), Kitware Inc (2011), Oak Ridge National Laboratory (2012) and Xerox Research (2013).

My research has focused on data visualization and data science. I have participated in projects on information visualization, scientific visualization, and visual analytics. I was also involved in interdisciplinary collaborations that focused on the development of novel visualization methods to enable both climate and urban data analysis. I am also interested in reverse engineering of visualizations for automatic chart interpretation.