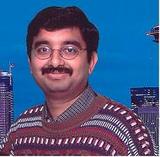 Show Academic Trajectory
Ego Network
D-Core
Research Interests
Author Statistics
ACM_Citations
Experience
Sign in to view more
Education
Sign in to view more
Bio
I am Deputy Managing Director at Microsoft Research India. After arriving at the India lab in 2007, I founded and led the Mobility, Networks, and Systems group for several years. I was previously with Microsoft Research Redmond for 8½ years. Before that, I obtained a Ph.D. in Computer Science from the University of California at Berkeley in September 1998. Professor Randy Katz was my advisor, having previously obtained an M.S. in Computer Science also from UC Berkeley in 1995 (advised by Professor Domenico Ferrari) and a B.Tech. in Computer Science and Engineering from the Indian Institute of Technology, Delhi in 1993.

My research interests lie broadly in mobile and networked systems. My current work centers on the intersection of sensor systems and mobile computing, and on efficient mobile communication. My past projects have spanned a range of areas, including network measurement, wireless networking, RFID, geolocation, network tomography, and peer-to-peer networking. The technologies developed in some of these projects (e.g., the ProbeGap bandwidth probing tool and the GeoCluster technique for learning IP-location mapping) have been transferred to Microsoft’s product groups while others (e.g., the RADAR WLAN-based user localization system) have been made available through Microsoft’s technology licensing program.

I am an INAE Fellow, IEEE Fellow, and ACM Fellow. I have been a recipient of the Shanti Swarup Bhatnagar Prize for Science and Technology in 2016, the ACM SIGMOBILE Test-of-Time Paper Award in 2016 and 2019, and the Distinguished Alumnus Award at IIT Delhi in 2018. I have served both as General Co-Chair of the ACM SIGCOMM conference (in 2010 in New Delhi) and as Program Co-Chair (in 2012) and also served on the editorial board of ACM SIGCOMM Computer Communication Review, IEEE/ACM Transactions on Networking, and IEEE Transactions on Mobile Computing. I have served on and chaired the ACM SIGCOMM Technical Steering Committee. I have been serving as a member of the inaugural ACM SIGCOMM Industrial Liaison Board since 2014 and as chair since July 2017.